TORONTO, March 11, 2022 – In celebration of International Women’s Day, the DMZ has unveiled the inaugural winners of their highly anticipated annual award: DMZ’s Women of the Year. Launched this year, the award is designed to honour inspirational women in Canada’s tech and business community and highlight their outstanding accomplishments and contributions to creating impact.

Curated by the tech and business community, nearly 600 nominations for the award were received from across Canada. The final list of award recipients represents innovative women-identifying changemakers from diverse backgrounds and industries, including startup founders, corporate leaders, non-profit trailblazers, and emerging youth. 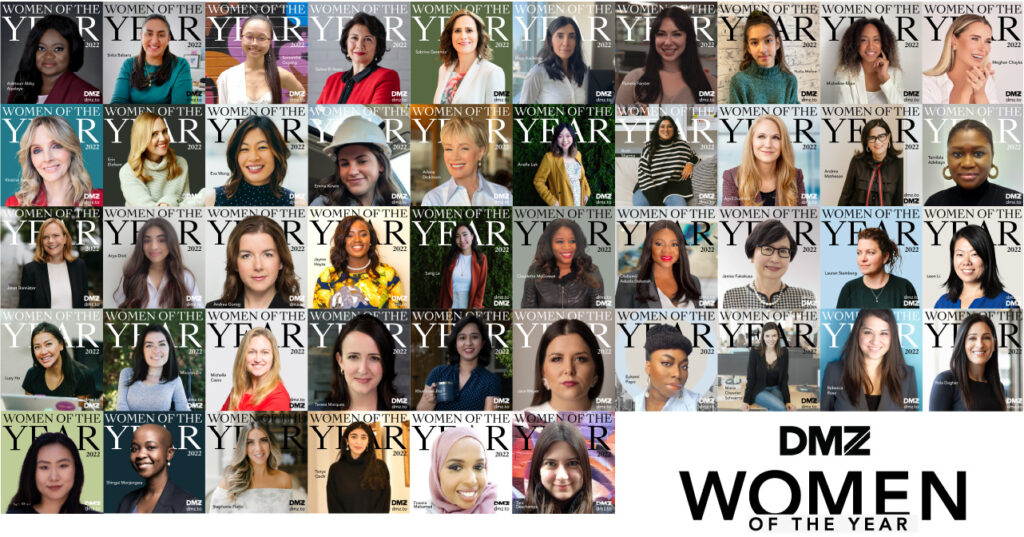 DMZ’s 2022 Women of the Year award recipients include:

“It’s essential to recognize and celebrate the contributions of women who are driving the Canadian technology ecosystem forward – not just one month or day per year, but always,” said Arati Sharma, Founding Partner of Backbone Angels, entrepreneur and official award recipient. “We must continue to empower companies led by women and people of colour, in addition to the funds supporting these groups, as representation in positions of power is fundamental to driving impactful change. I am grateful to be recognized by the DMZ alongside this excellent group of women leaders.”

“The DMZ is ecstatic to officially reveal the inaugural winners of DMZ’s Women of the Year. Their contributions to the Canadian tech and business landscapes are immeasurable, said Abdullah Snobar, the Executive Director of the DMZ. “Women, and especially women of colour, do not have equal access to the tech and business ecosystems in Canada. This award was designed with one purpose in mind —  to put a spotlight on their work and achievements.

For more information on all of the DMZ Women of the Year award recipients head over to dmz.to/woty2022.

Nominations for next year’s DMZ Women of the Year awards will be opened early 2023.

The DMZ is a leading startup incubator equipping the next generation of leading tech entrepreneurs with the tools needed to build, launch, and scale highly impactful startups. By providing connections to customers, coaching, capital, and a community, the DMZ’s customized approach helps innovators reach the next milestone in their entrepreneurial journey – whatever that might be. Through its award-winning programming, the DMZ has helped more than 670 startups raise $1.55 billion in capital and create 4,550+ jobs. Headquartered in Toronto, Canada with globally-accessible programming, the DMZ has a widely-recognized international presence with offices in Vietnam and India, and partnerships across North America, Latin America, Africa and Asia.

Back to Media Relations