The real estate startup is located in downtown, Toronto — one of Canada’s most competitive real estate markets — which means employees have to always be on their toes since local listings can change in the blink of an eye.

Unlike some of its competitors, Casalova is a one-stop shop that brings together prospective renters, landlords and agents all in one place. Users who sign up get access to new homes and a certified agent, while landlords have their properties listed and also get a $100,000 insurance package so they can rest easy knowing that if a tenant damages their homes they won’t go into debt to fix it.

Here’s an exclusive behind-the-scenes look at the inner workings of Casalova’s team and their founder. 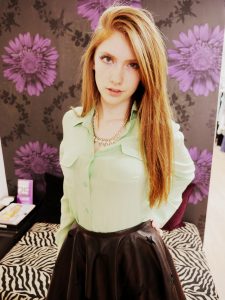 Jennifer Meade, one of the company’s newest agents, knows all too well how volatile Toronto’s real estate market is these days. She’s seen up-close-and-personal the city’s property market jump more than 20 per cent in the last year, and more importantly, the impact it’s had on prospective renters and buyers.

“Everything moves so fast now,” she explains. “If you want something in this market you have to be ready to move quickly because property can go just like that,” she says while snapping her fingers for added effect.

For Meade, most days involve checking her email to see which new clients she’s been matched with through Casalova or connecting with new renters through her own personal network. Today her client, a nurse moving from Barrie to Toronto, is looking for a condo to call home in the downtown core, which Meade confesses “can be tricky” since the prospective renter’s 14-hour job makes it difficult to view properties during normal hours.

Today her day starts at 7 a.m. when she scours local listings for new condos. When she finds one that matches her client’s needs (in this case parking and access to shopping and entertainment) she calls the property manager to book an appointment and waits for her client to make the long drive downtown.

Two hours later she shows the nurse around a lovely condo near the city’s waterfront while rattling of its impressive amenities — inclusive gym, pool and hot tub, to name a few. It’s a one bedroom, 778 square feet, home that overlooks Lake Ontario. While Meade thinks she may have found her client the perfect home although she isn’t so sure and wants to look at a few other places before making a final decision.

Keen to see her client view as many places as possible she hails a taxi that will shuttle both of them to their next destination. She also informs the condo owner over the phone that her client is interested in the property but needs a little more time to make a decision. “It’s important to keep every door open,” she says with a smile while juggling two phones.

Two hours and three condo viewings later (a cancelled showing due to a lost lockbox means the day ends early) just reinforces how much her client loved the first apartment she viewed earlier in the day. Meade later makes an official offer that day with help from Casalova’s customer service team and then make plans to meet tomorrow to follow-up on signing details.

“It always feels good when you find the perfect home for someone,” Meade explains. 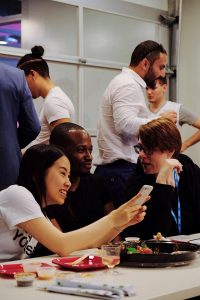 Naveed Marzook, Casalova’s vice-president of customer success, loves his job. It’s easy to see that he and his team shoulder most of the face-to-face customer and agent work the company deals with on a daily basis. Any questions about properties, or payment requests go through his team.

For all intents and purposes, Marzook and his team are like the swiss army knife of the company, although he refers to his team as the startup’s “helpers”. They go “above and beyond” what they’re expected to do all the time, he explains. “Everyone pitches in and we appreciate it.”

Marzook and his team believe that the company’s success boils down to the fact the team actually like working together. In an attempt to prove his point, he holds up a golden owl, fondly named Hooter, which is given to the employee who happens to “pitch in the most.”

Today it might be him, and the next day it could be Jess Shulist — one of his colleagues whose computer is decorated with Rihanna stickers and works with agents to get client documents ready.

“It’s a fun place to work,” Shulist says while looking fondly at Hooter. “I think it’s cool how we never forget to recognize how hard each other is working.” 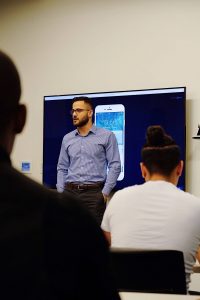 Ray Jaff wakes up at 6 a.m. everyday to workout. He works through company problems while running on the treadmill and brainstorms new solutions while lifting weights. “It’s what gets me through the day,” he explains.

The entrepreneur is dressed in a fitted oxford shirt and pleated pants, but says he would be just as comfortable in jeans and a t-shirt.

This afternoon he’s focused mostly on checking in with team members, going over the website’s latest updates and the company’s plans to move to a new office on the westside.

At a meeting with the team’s engineers, Jaff and the developers hunker down at their desk to come up with solutions and a tentative timeline for new product updates. Forty-five minutes later they’re done and the founder is already on his way to his next meeting. His phone blinks throughout the afternoon proving just how in-demand he is these days, especially now that the company has launched its services in Vancouver.

It’s a real coup for the startup, he says. “We’ve been working towards this for a while.” When asked how he manages to avoid burnout, Jaff merely laughs and shrugs. “It’s a team effort, we’re all working on this together and we aim to only hire A-players who are dedicated to the Casalova mission. It’s makes everyone’s life a lot easier.”

Later on the company’s real estate agents, front-line staff and Jaff convene to celebrate their quarterly wins at a complimentary lunch while munching on sushi, chips, cupcakes and champagne. Despite its seemingly small team, the event is an important way to show employees how much their hard work is appreciated.

“Casalova is like a family. We value everyone and just because the agents aren’t in the office with us doesn’t mean they shouldn’t be here with us to celebrate.”

The award categories include ‘Rookie of the month’, ‘hardest hustler,’ and ‘MVP of the month.’ After the awards are given out, Jaff motions for people to move to the front of the room for photos with the honourees.

Once the meeting is over, it’s back to meetups with staff, responding to more emails and later one-on-ones about Vancouver. It’s almost 8 p.m. by the time his day is finished.

As he readies his things to leave for the night the entrepreneur’s eyes are still glued to his smartphone.