Hear from Roadmunk’s Co-Founder & CEO, Latif Nanji, on his rollercoaster ride from emergence to exit

Hear from Roadmunk’s Co-Founder & CEO, Latif Nanji, on his rollercoaster ride from emergence to exit

Latif Nanji, Co-Founder and CEO of SaaS platform Roadmunk, connects the dots of his entrepreneurial journey at the DMZ’s Founder Dinner, uncovering his rollercoaster ride from emergence to exit.

Founded in 2012, Roadmunk is product management software that solves how product innovators build and communicate their strategy. Roadmunk has an impressive track record, from being listed as one of Deloitte’s Technology Fast 50 and their acquisition by Tempo in 2021 to serving over 3,000+ customers, including Amazon, Visa, Nike, Adobe and Morgan Stanley, to name a few.

Latif’s history is also not one to miss. Before Roadmunk, he co-founded several companies, including Pokerspace, an online social network for poker players, and Pragmatic CEO, a Toronto meet-up group for tech entrepreneurs. He also spent five years as a Product Manager at Miovision, working on intelligent traffic infrastructure, where he developed his passion for helping product managers build the right things for customers. Latif enjoys biohacking, rock climbing, scuba diving and angel investing in his spare time.

Looking for inspiration to build the next big thing? Check out Latif’s insights on his rollercoaster ride from emergence to exit from our latest DMZ Founder Dinner – an event series designed to bring DMZ’s community together for an evening of food, drinks and connections. ​​Watch Latif’s full founder talk below, or keep reading, to discover his top tips for being a successful entrepreneur and building an acquirable business.

“One of the early things I instantiated in the business was a core value called ‘Start with empathy.’ It was a family-like core value, and I thought it was a great idea.

Eventually, I realized that the mentality I had was one of protectionism — a high empathy and high loyalty culture. There’s nothing wrong with these values, but as an investor, I want to know if you are going to make the hard decisions.

Sometimes the teams need to change their structure or formation, just like they do in a sports team, to get to the outcome. If you want to level up through the divisions in soccer, you are going to different players as you progress. It’s not that you can’t thank the players before, but the new ones have to come in.”

The secret to reliable hiring: homework

“There were a few key things we did to fix our ongoing issue of short-lived new hires:

“We had to hire a software architect in 2020. I interviewed him, and I thought he was great, but I didn’t think he was that impressive from a cultural perspective.

I had my two top senior engineers interview him, and they came back to me and said, ‘We don’t think he’s the right fit.’

My COO walks in, and he asks us what we were doing. I said, ‘We’re interviewing.’ He said, ‘No, you’re not; students don’t interview the teacher.’

It was a simple concept, but it felt like a hammer hitting me in the head. So, we brought in the VP of Platform at Ritual and two external CTOs, who gave him a test on how to scale Google Drive. They came back with a report and said, ‘If you don’t hire him, we will.’

The key to winning the valuation game is pacing

“The problem isn’t with raising a little bit more money; it’s when you get further down the valuation trap.

If you raise five, six, seven million bucks when you only need  $1m, your post-money is maybe between $30 to $35 million instead of $5-10m. That means in the next 24 to 36 months or less, you’re going to grow >$30 million in valuation. That’s where things get really complicated. Going incrementally at a reasonable pace is how I think the best startups function before they see some version of a breakout growth path.” 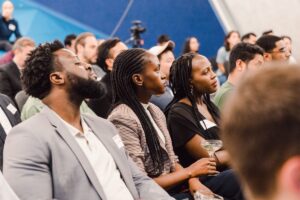 Want a front-row seat at the next DMZ Founder Dinner to hear from other inspiring founders? Apply now to join our next Incubator cohort at dmz.to/incubator.

Sign up for our Tech Talk newsletter to get the latest tech news, updates, and special offers.