On Wednesdays, we startup.

Women tech founders drive innovation and the tech ecosystem – when women-led businesses are thriving, the economy at large thrives.

It’s no ecosystem secret that women founders face disproportionate barriers when starting and growing a business in comparison to their male counterparts. Women are often denied business loans because of gender and cultural biases, and women of colour, in particular, face even greater barriers when it comes to accessing startup capital.

Add in a global pandemic, and women entrepreneurs had one more ball to juggle. On average, women faced greater economic stress, and an increased burden for caregiving and housework.

We have marvelled at the resilience demonstrated by women founders, and are truly honoured to support them along their entrepreneurial journeys.

To celebrate our women-identifying founders, we’ve put together ‘On Wednesdays we startup’, a blog series dedicated to putting women founders center stage to acknowledge their work, complexities and wins!

We hope to push women-founder stories forward, and share lessons learned and insights for other aspiring women entrepreneurs.

To kick off the series, we sat down with Nouhaila Chelkhaoui, Manager of the Women Founders Programs at the DMZ to learn about what inspired her to pursue a career in the innovation sector, and her vision for the ‘On Wednesdays, we startup’ series.

Can you tell us a little bit about yourself?

I came to Canada at the age of 17 from Morocco – all by myself. I went to the University of Toronto where I studied political science. After graduating, I wasn’t sure what I wanted to pursue. So, I decided to leave Canada temporarily, travelled back to Morocco, and spent almost one year in Turkey where I taught English.

This was the most formative year I’ve had to date. It was the year I realized what I wanted to do – and I decided to come back to Canada to work in the startup ecosystem.

I landed a job at a tech startup helping newcomers access Canadian healthcare. A couple of years later, I started attending the DMZ’s women in tech events. After connecting with the DMZ community, I ended up working with the DMZ and today I manage the Women Founders Programs.

A few years into my time here, I realized I also had a dream of being an entrepreneur myself, so I decided to found Scale Without Borders.

When I’m not working at the DMZ, I spend my time working on the Scale Without Borders platform that helps Canadian newcomers navigate the tech ecosystem. As a newcomer myself who didn’t have access to the necessary support systems and networks, I wanted to give back to those who faced similar challenges.

What motivated you to pursue a role that supports startup founders? 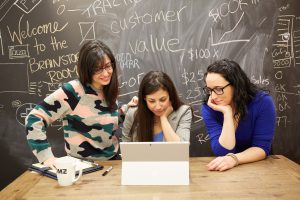 With a background in political science, I used to think that the only way to solve complex global challenges was at the political level. I then discovered that innovation and entrepreneurship was an alternative way to solving some of our world’s biggest challenges – perhaps a much more effective way!

Who are you inspired by? What strong or successful women leaders do you look up to, whether that’s professionally or personally?

At the risk of sounding unoriginal, I always look up to women like Michelle Obama, Amal Clooney, and Emma Watson. But, I also remind myself that they too are imperfect and that’s been very helpful for me.

I wish more women owned up to their struggles so we could all know we’re not alone. I also look up to my older sister and my mother, who are both mentors of mine. My sister, Sara, left Morocco to study in France at around 16 on her own, which really paved the way for me. She pursued a field in STEM and went on to lead a career in an industry that is largely male-dominated. My mother raised and supported the two of us, which played an immense role in my career trajectory.

What’s the greatest piece of advice you’ve ever received?

There isn’t anything you need that you can’t find within yourself. It’s often easier said than done, but it is doable – and it’s worth it when it’s done!

“There isn’t anything you need that you can’t find within yourself. It’s often easier said than done, but it is doable – and it’s worth it when it’s done!” –Nouhaila Chelkhaoui, Manager, DMZ Women Founders Programs

Who are up and coming women founders that we should keep an eye out for?

Wow, way too many to list. But let me give it a shot.

And so many more. I could really go on here, but there isn’t enough blog space in the world to capture all the outstanding women founders out there.

What is your vision behind starting ‘On Wednesdays, we startup’, and what do you hope to achieve with the series? 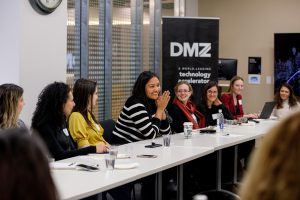 I look at the series as a communal platform for women to share the incredible tech businesses they are working on. To me, it’s an opportunity to build authentic relationships in the tech ecosystem with fellow women founders. Plus, it’s a bonus if a business deal comes out of it. All in all, I feel privileged to be part of this group.

The series will provide women founders a platform to be seen, heard, understood, and promoted. Through this series, women founders will discuss the problems their startups are addressing, their successes, and struggles. I also hope that aspiring founders take inspiration from these stories and find opportunities to connect and learn from some of the trailblazing women we cover in the series.

What are some crucial changes you want to see in the startup ecosystem for future and current women founders?

What do I mean by resources? I mean funding, sponsorship, impactful mentorship, visibility and exposure. I’d also like to see less lip service and performative activities which are primarily motivated by PR benefits.

Another crucial change I think we need to make is to move away from the self-defeating narrative. We must acknowledge the barriers women founders face, and hold those accountable who are benefiting from the uneven distribution of resources. However, we must also do so in a way that is productive and paves the way forward for women founders.

“Another crucial change I think we need to make is to move away from the self-defeating narrative. We must acknowledge the barriers women founders face, and hold those accountable who are benefiting from the uneven distribution of resources. However, we must also do so in a way that is productive and paves the way forward for women founders.” –Nouhaila Chelkhaoui, Manager, DMZ Women Founders Programs

What is currently the most challenging part of being a woman founder in the tech space? 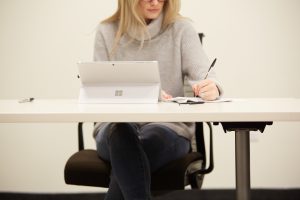 Traditionally, women founders are underrepresented and have been excluded from the inner circles that contain key resources and connections.

This breeds an incessant cycle where women-led startups are at a disadvantage and conversely, other founders benefit from the unfair advantage of being in the circle, creating a vicious cycle. And so, breaking into that circle becomes extremely important. It is a challenge, but one that we can and will overcome.

Do you think it’s important for investors to seek out women-led startups? What do they bring to the table that’s unique?

There’s a ton of data out there that demonstrates how diverse teams do better than their homogeneous counterparts.

When I say diverse I am referring to gender and beyond. An intersectional approach is very important, and this is a data-backed perspective.

Additionally, more than a return on investment, seeking out women-led startups also means involving the half of the population that is underrepresented and supporting challenges that are meaningful to them.

“More than a return on investment, seeking out women-led startups also means involving the half of the population that is underrepresented and supporting challenges that are meaningful to them.” –Nouhaila Chelkhaoui, Manager, DMZ Women Founders Programs

What three tips would you give women founders looking to grow and create connections within the startup ecosystem? 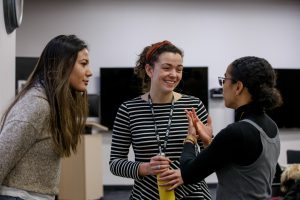 There are three foundational values I try sticking to as a woman founder. First, especially when starting out, always ask yourself ‘what is your why’? Would you enjoy doing this work year after year after year? Next, it’s so important to find a balance between healthy urgency and patience. Finding the balance is a process that takes practice.

My third tip for women founders? At the end of the day, put yourself first – before everything, including your business.

Learn more about and connect with Nouhaila here.