Traditional news publishers are fighting an uphill battle these days.

A 24-hour news cycle, online social media platforms that regurgitate free news and a decline in advertising rates have created a hurricane of hurt for the news industry, but today’s biggest companies refuse to go down without a fight.

Media companies – like Toronto Life and Now Magazine – are looking for new ways to make money and turning to tech startups for a helping hand.

Enter: Rewordly, a Toronto-based tech startup. The company has created an AI-powered product called Readefined that lets publishers better gauge how readers engage with online stories, determine how much content users read in real-time and what multimedia aspects of a story people actually like via behaviour tracking software. These important metrics are the cornerstone for any publisher since it helps not only attract high quality sponsors but new advertising partners.

“We have a vision to truly transform– and help –  the publishing world,” says Mario Vasilescu, the company’s co-founder and CEO. “We’ve won some awards and are in discussions with Canada’s top four publishers and associations from around the world. It’s still early days, having just launched.”

A closer look at Readefined

Here’s how the platform works: A user signs up at Readefined and installs the company’s tracking software or downloads the official WordPress plugin.
Afterward the software starts interpreting patterns for every person that visits a publisher’s page and can even make AI-based suggestions about what writers can do to improve their content before they publish future stories. 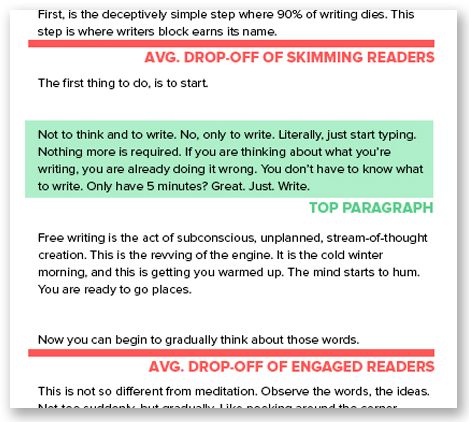 The company is currently in beta and working towards a mid-August launch, but for now publishers with views under 500,000 per month can sign up to use its software for only $19 per month. Companies with more readers are charged on a per view basis.

For Vasilescu, his company’s product is a way for newspapers – and content creators of all kinds – to truly understand what readers want in the digital age. No more guessing and conjecture.

Of course, the startup’s team has never worked for a newspaper, but they understand the difficulties legacy newspapers can face. Adapting to a changing industry is something Rewordly is all too familiar with. The company has undergone several pivots since it launched in 2012.

“We’ve had a winding journey. The initial product took shape while working at a management consulting company in Paris. It was really shaped by seeing how inefficiently content was managed internally and externally,” explains Vasilescu.

“As naive first-time founders, we initially built a single product that – with the benefit of hindsight – we now see was attempting to solve all of the world’s content-related issues in one behemoth of a platform. People got really excited about it, but would be totally overwhelmed using so we went back to the drawing board and created this.”

How are publishers adapting?

For most publishers, it’s the company’s machine learning software – which gets smarter over time as it processes different reading behaviour and content – that could provide the most return. Keeping readers online longer, more engaged and even being able to predict what will work best is crucial.

And a focus on superior engagement data couldn’t come at a better time. Online advertising is now under attack. Over $7 billion in click fraud is reported every year. Meanwhile, over 50 per cent of online users are using adblocking software and a little over one-third of traffic is fake, according to a Wall Street Journal story.

“Now is the time,” Vasilescu adds. “We’re ready to change how the publishing world works for the better. We’re excited to see what comes next.”