How one Canadian entrepreneur survived and thrived in NYC

For years scrappy, young entrepreneurs have migrated to NYC with the hope of one day making it big.

The Bay area — once seen as the only top spot for tech — is no longer the be-all-and-end-all place for innovators. NYC-grown tech scions like Etsy, Blue Apron, ZocDoc and Buzzfeed have proven that building a billion-dollar company in Silicon Alley is not only possible, but slowly becoming the norm.

For those who have the money (and resources) to live in New York, success is within reach. Unfortunately, not all entrepreneurs can easily pack up and move to the Big Apple. Meanwhile, working part-time in New York is often not enough for businesses on the hunt for high-value growth.

Canadian entrepreneur Ami Shah knows better than most how difficult it can be to work and network part-time in the city. Not too long ago the cofounder of education software company Peekapak spent weeks flying back and forth between her office in Toronto and NYC for work. Without a dedicated space in the city it meant relegating meetings with U.S. clients to subpar hotel lobbies or crowded coffee shops. 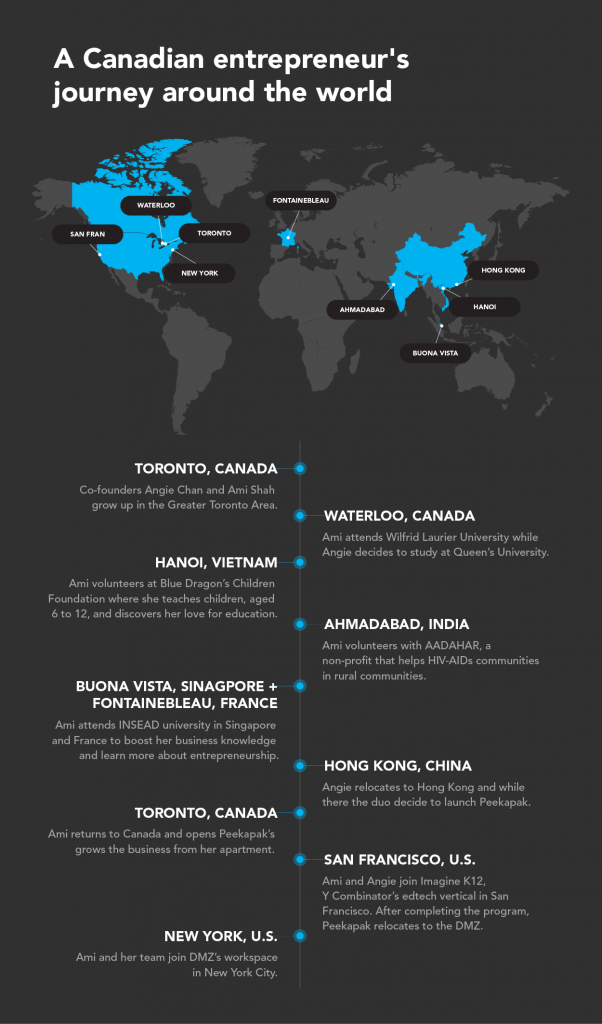 “It’s not easy when you don’t have an office,” Shah explains. “We didn’t have a homebase so everyday [tasks] like networking or meeting clients were difficult.”

Thankfully things changed for the better in June 2017. That was when Shah and her team were chosen by the DMZ, North America’s number one university-based tech incubator, to work out of its brand new space at Primary. The co-working office, located in the heart of Manhattan, gives select Canadian entrepreneurs, like herself, a place to call home while in the big city and easy access to a host of free amenities, like desks, reception services, conference rooms and wellness classes.

The opportunity has — for all intents and purposes — changed her business in ways that she could never have imagined. “We’re focused on growth in the New York and New Jersey area now and since last year we’ve grown our sales three times,” she explains, while crediting the DMZ with playing a pivotal role in the company’s recent good fortune. “Having an office here signals to our partners that we want to spend more time in the region. We have [the] space to spend that time and, I think, it gives a lot of confidence to our partners.”

The good news doesn’t stop there either. Since working out of the DMZ’s office in New York her team has moved out of its temporary home at Yonge and Dundas and into their very own office in downtown, Toronto.

The tech accelerator’s NY space has also improved Shah’s overall health and wellness, she says. The U.S. Primary location is now her home away from home where she can work, eat and also relax at the end of a long day.

“Usually when I’m there I’ll pick up a yoga class. In a city like New York where you’re rushing out to meet people it helps that there’s a place called ‘The Studio’ where any member can drop into a relaxation session.” Getting her “zen on,” as she calls it, even if it’s only for a few minutes per day, is helpful for the entrepreneur who regularly pulls 12-hour days.

Right now Shah and her team plan to maintain their presence in NYC well into the future, but don’t plan to give up their Canadian roots any time soon.

Ideas 43 articles in this collection See all 43 articles
Ideas Basecamp 2022: Presenting this year’s winners 8 weeks, 20 students, 57 workshops, 4800+ combined hours working on startups, and $35K in grant prizes It’s been yet another successful summer ...

By the DMZ, Tech Incubator September 2, 2022
Back to the review