Dream of getting acquired one day? Get first-hand insights from a founder who’s done it

Derek Hopfner, DMZ alum and Co-Founder of Founded, gives an inside scoop on the motivation behind building the startup and getting acquired, along with advice founders should consider to achieve a successful exit someday.

When Founded launched in 2017, co-founders
Derek Hopfner, Shane Murphy and Travis Houlette were driven by the company’s mission to make the legal side of business an effortless experience for entrepreneurs.

Within a few short years, thousands of dedicated business users joined Founded. Fast forward to this year: the company made the announcement that they had been acquired by RBC Ventures!
In the coming months, the platform will merge with
Ownr, RBC’s existing platform for small business incorporation – but the whole Founded team is staying intact and moving under the RBC Ventures umbrella, together.

Getting acquired is what many young startups hope and dream for one day, but many overlook the meticulous planning and strategic considerations that need to happen at an early stage. We spoke with Derek Hopfner about the experience of scaling Founded, and what startup founders can do early on to position themselves for a successful exit.

Take a look at our Q&A with Derek to hear what he had to say.

What does Founded do?

Founded is an online legal platform with a focus on making entrepreneurship easy. When starting a business, there is an endless number of things that entrepreneurs need to think about early on, so taking away the legal components and making it really simple for them was something that was really important to us.

An entrepreneur can join Founded (soon to be Ownr) and can use the platform to navigate various legal tasks as their company grows. This includes anything from preparing an employment agreement for a new employee to creating website terms of use and privacy policy. You can even create an employee stock option plan, something that’s gaining popularity from startups. 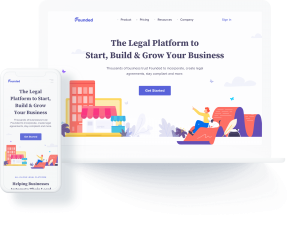 It sounds like the platform is valuable to companies at all stages of growth, not only young startups looking to get incorporated?

That’s true! Many entrepreneurs start their company on Founded, but we also bring on companies that have incorporated elsewhere and want to benefit from using Founded’s technology for legal work going forward.

What was the motivation behind creating Founded? Were you ever an entrepreneur who experienced similar challenges with getting legal support?

I’m a former lawyer, so I actually saw it from the other side where I did a lot of corporate commercial work with businesses. Oftentimes, legal work was expensive for startups or they saw it as complicated. They didn’t want to meet in a lawyer’s office – they wanted to do things electronically, quickly and seamlessly.

Two out of the three of our founders are lawyers: myself and Shane. Travis is our CTO and Head of Product, and he had the experience from an entrepreneur’s standpoint. Shane and I saw the problems through a lawyer’s lens. We’ve got a good combo between the three of us! 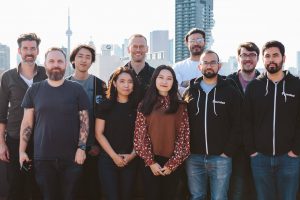 What was the process of scaling the company? Did you have a funding strategy?

We launched in October 2017, so we were in operation for about three years before getting acquired.

We were really lean on funding. We had some angels that supported us but never completed an institutional round of venture capital funding. We also had support from the Ontario Centre of Excellence and government programs like IRAP.

We grew our sales and revenue and always reinvested it back into the company. That meant hiring for sales, marketing, developers – but we have always had a lean team.

We also had a really strong product, so word of mouth helped a lot. People would use the platform, have a great experience, and go on to encourage their friends to use it.

How did joining the DMZ help Founded?

During our time at the DMZ, the company got to a profitable state, which allowed us to continue growing without having to rely on funding.

There are two big things in particular that come to mind that allowed us to do this: we gained a stronger understanding of how to accelerate our sales processes, and learned how to read and analyze our data to then base our strategy around it.

Everything was super helpful – marketing was great, product was great, the programming was really holistic. 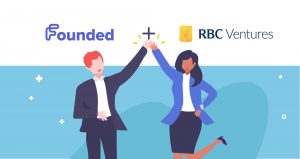 Many founders’ biggest dream is to get acquired and get that big exit. Was getting acquired a goal you were working towards from the early days?

It wasn’t necessarily the goal. When we started the company, we were really driven to make entrepreneurship easy.

When you decide to take money from funders, you have to realize they’re not doing it purely to support you and your goal to build a company – they do expect some sort of return to the investment that they’re making. I think most entrepreneurs realize there needs to be some thought towards an exit strategy.
We had been working with RBC for two years. It was never our goal to get acquired at this exact time – it was pretty organic.

I think it’s helpful to start thinking about it early on when starting a company. That being said, if you were to ask me five years ago if the largest bank in Canada were to acquire a legal technology company, I would have never imagined that!

What advice would you give a founder that is interested in getting acquired? What are some important things a founder should consider?

It’s important to understand, early on, what the implications are if you’re taking funding, especially from VCs. Understand how dilution works. Angels are one form of funding, but once you move to institutional funding, there are strong expectations for returns on their investments – to the tune of 10, 15 or even 20 times the initial investment. You need to find a path to hit those metrics.

Next, in the early stages of building a company, take a look beforehand at the exit opportunities that may exist in your particular industry. It’s not a bad idea to look at each industry and understand the valuation multiples which exist. In most cases, you’re putting your whole life into your business – likely a lot of financial resources. So, if you have two choices that you’re equally passionate about, why not go with the industry that has a multiple exit of traditionally 15x revenue, versus another that might only be 2x or 3x.

Now that you’ve gone through most of the acquisition process, do you have any important lessons learned to share with other founders?

Be open to business opportunities as you are growing the company because you don’t know where they’re going to lead. I don’t think it was really on our radar that RBC was going to be our acquirer when we started working with them a couple of years ago, but that turned into something real this year. Where you start with a company is not where you’re going to end up, and I think being open and fluid about that is important.

If you’re having discussions about an acquisition, it’s going to take a lot of your time – a lot more than you’d think. It’s so important to make sure your team is still focused on delivering value each day with the acknowledgement that this acquisition might not go ahead.

Also, don’t put 100% of your time and efforts into the acquisition, or you’ll leave your business behind. You need to continue to drive value to your customers and keep building a strong business. That’s really the best counterpoint to any negotiation. If things fall through, you can then walk away at any time and continue pursuing your business. 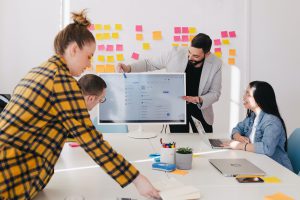 When should a founder communicate with their team that an acquisition could be in the works?

I think it depends on the team and its size. Because of COVID and everything that was going on in the world, we kept our team focused on building the product and helping customers until the later stages of the acquisition.  That was the right decision because of the uncertain environment the world was in

Communication strategies will differ from one company to the next. Do what’s best for your company, for your team, and for the environment you’re in.

Thanks, Derek! Now, what’s next for you and the Founded team?

We’re all now RBC Ventures employees! The whole team came over, which I’m super happy about. We get to pursue the exact same thing that we were doing before, but with a much bigger budget and more resources.

I’m as excited as ever to continue to deliver on the same mission to help entrepreneurs all across  Canada, and ideally look to new jurisdictions as well.  We’re lucky in that everything is kind of the same for us, but now we just have more opportunities and resources to deliver!

Congrats to Derek and the entire Founded team on your success, and thank you for your commitment to helping entrepreneurs at every stage of their journey. Keep up with Founded over the coming months as it integrates with RBC Ventures’ Ownr to bring the best business formation and legal tools together under one roof.

Founders 53 articles in this collection See all 53 articles
Founders Your golden ticket to business success: customer relationships How to harness the power of relationships to drive business innovation and success As an early-stage founder, it’s all about your customers. Want...