Hear from founders at the DMZ and Entrepreneur First about how the pandemic influenced the startup world, and what the future of business and work looks like moving into our new post-pandemic norm

The pandemic transformed entrepreneurship and the professional work environment as we know it.

But now as restrictions lift and the world shifts into its “new normal”, we’re coming into a clearer vision for the future of work. That certainty brings a huge sigh of relief to many founders, and they’re excited to hit the ground running. Entrepreneurs, by nature, need to be able to connect in a physical presence – that’s ultimately how the world’s greatest innovations come to be.

Four founders at various stages of startup growth reflect on their experiences as entrepreneurs over the last couple of years and share why going back to the office is helping them grow and evolve their startups’ working styles. 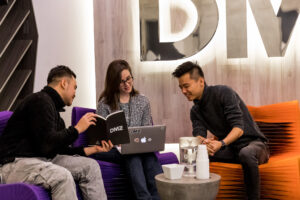 The pandemic spurred a wave of first-time entrepreneurs

The desire to create impact through entrepreneurship rather than travel a more traditional career path resonated with Grigoriy Kimaev, a Ph.D. graduate. His interest in entrepreneurship piqued further when he heard about Entrepreneur First (EF), a talent investor that runs cohorts in six cities across the globe with a location in Toronto as of last year.

Fast forward to this year, Grigoriy is now a Founder-in-Residence in EF’s second cohort, following through on his entrepreneurial ambitions.

Grigoriy credits his desire to build a business to the profound societal change brought on by the pandemic. “People and companies were far more eager for change during the height of the pandemic than in low-stress times… I felt I’d hate myself if I didn’t try to build a venture,” Grigoriy said.

Despite the uncertainty of the pandemic, Grigory was excited to embark on the entrepreneurial journey at EF with like-minded people who were equally ambitious and ready to build.

Back to environments that spark innovation and productivity

Those who became entrepreneurs during the pandemic had a unique experience. While many had more spare time to devote towards building a business, remote work and isolation had their disadvantages. For one, entrepreneurship can be a lonely endeavour. But beyond that, building a startup in the early stages requires collaboration, networking, and access to mentors.

Furthermore, it’s no easy feat for small teams to be productive in a virtual arrangement, especially when they’re new. Some aspects of running a business simply can’t be replicated in a remote setting. Building team spirit, forming peer-to-peer connections, and managing people in general can pose challenges when done virtually, and that’s why so many startups founders have eagerly awaited a return to normalcy. 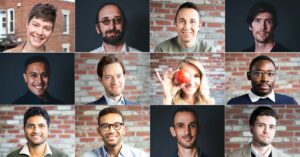 This year, MaRS became EF Toronto’s home. For Grigory, the atmosphere of the office has helped him feel recharged, being surrounded by enthusiastic and motivated fellow founders. Grigory describes it as a “spirit of innovation” that’s immediately felt after passing through EF’s doors. If you’ve got a great business idea and you’re ready to find a co-founder like Grigory, Entrepreneur First is currently accepting applications for their next cohort until December 12.

Like Entrepreneur First, the DMZ was eager to welcome founders back this fall after nearly a year and a half of being closed, and DMZ founders have also felt the immense benefits of being able to work on their startups, alongside their teams and other founders, in a physical presence.

Two Co-founders, Sarah Rennick and Cherry Xu, had been living three time zones apart when building and launching their company Alli during the pandemic, Sarah in Toronto and Cherry in Vancouver. Once the DMZ re-opened, Cherry hopped on a plane and made the trek across the country to finally be able to work with Sarah face-to-face.

“I wanted to work with Sarah in person and be able to meet the broader DMZ community,” explains Cherry. “It’s always exciting to meet others who are risking so much to pursue their passion.”

Cherry adds that her move has helped productivity and having a sense of connection with others. “Working in the office is conducive to not only productivity, but it helps me mentally as well. Zoom can be draining and the human connection gets missed. Meetings are a lot more enjoyable in person.”

“Try as you might, organic conversations that happen in the office just don’t happen the same via scheduled calls!” Sarah adds.

One founder who decided to adopt a hybrid work model is Leonard Ivey, Founder of Softdrive. “Our team sees value in both the remote and in-person working environments,” explains Leonard, who was eager to start working in the DMZ space on a regular basis upon its re-opening this fall. 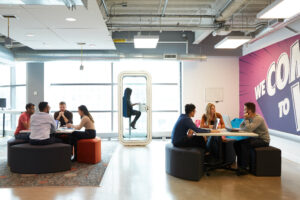 “The DMZ’s atmosphere lends to increased productivity in many ways for the team, and communication is a lot easier when you’re a small team in a startup that’s growing rapidly. But as we expand our team at Softdrive, we also want to enable remote work and empower our team with a flexible work model.”

Nimbus Learning, Mero Technologies and SingleKey met during their time at the DMZ Incubator back in 2019. This past summer, the three companies made a decision to split co-working space as they came back to the office with their teams. William Liu, a Co-founder and the CEO of Nimbus Learning, shares how it’s been a game-changer in helping each startup thrive.

“Obviously, there are the cost benefits. Rent is quite a bit more affordable when you have three companies splitting the cost of the office space,” William explains. “Beyond that, I’ve seen growth happen amongst all employees of the three companies that share the space.”

He also points out that working in the same space with other like-minded individuals promotes knowledge sharing. “Our teams – sales, client success, and marketing –  share ideas, processes, tools, and strategies with their counterparts at the other companies,” says William. He mentions that having late-night conversations with the founders of the other two companies has been tremendously helpful and an opportunity to share insights. 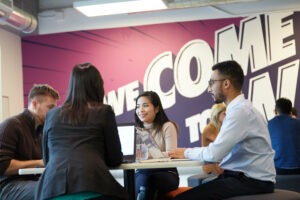 “I think it’s a perfect setup for any startup that’s not quite ready to have their own dedicated space, but still wants a co-working space that’s cozier than something like a WeWork,” he adds.

At the end of the day, founders know that a certain kind of magic happens in a startup environment that can’t be experienced through a computer screen.

The DMZ has welcomed founders back to the space, and we’re ecstatic to say the least. Truly, there’s nothing like watching our founders build connections, reach milestones, and hit new levels of success, especially in person. We’ve now introduced a hybrid model, giving founders the flexibility to access the DMZ’s programming both in person and virtually.

If you’re a tech founder ready to validate your business model, raise your first round of funding, and scale your startup, learn how the DMZ Incubator can help.

If you’ve got a great business idea and you’re ready to find a co-founder, Entrepreneur First is the place to meet your match and hit the ground running. Don’t miss the chance to apply for Entrepreneur First Toronto’s third cohort. Applications are open until December 12, 2022.

Founders 53 articles in this collection See all 53 articles
Founders Your golden ticket to business success: customer relationships How to harness the power of relationships to drive business innovation and success As an early-stage founder, it’s all about your customers. Want...